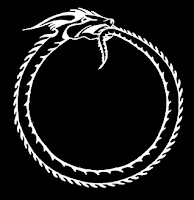 "What is time? It is a snake which eats its own tail, like this..."
&#151from Kurt Vonnegut's Breakfast of Champions, referring to the serpent Ouroboros.

On my ride into work this morning, I came upon another rider fussing with her wheel on the side of the trail. Being the noble gentleman that I am, I stopped to ask whether she needed help. She did. Seems she had flatted twice already this fine spring morning on her way to work; once earlier with the rear wheel, which she fixed using her only spare tube, and again just before I found her.

The front wheel was the victim this time, its innards pierced by some invisible trail missle or friendly fire from an unfaithful rim. As McFate* would have it, I had two tubes in my pack, so I offered her one. She accepted it, but only after asking to buy it from me, a polite enough gesture I suppose, but one that destroys the karma of the gift. Of course I refused, thinking some random good luck in the near future was far more valuable than a few bucks in my pocket now.

I waited while she began installing the new tube after pulling out the old one and dropping it in the grass beside her, where it lay motionless like a dead snake, tail in mouth. She had only a CO2 inflater, no pump, and I wanted to be sure she would be on her way after the fix—those micro inflators can be capricious sometimes, and a new tube is no good if you can't breathe life into it. She seemed willing to chat a bit while she worked, and the day being as nice as it was, I was in no great hurry to get to the office anyway. The way I see it, time spent idly is never time wasted, and he who finds work for idle hands is indeed a devil, to paraphrase an old adage.